My previous blog post raised some discussion on Reddit. There were two major issues raised. The first one is that a helloworld application is not much of a test. The other was that because the distro was so new, the test does not validate that backwards compatibility goes back 16 years, but only about 6. 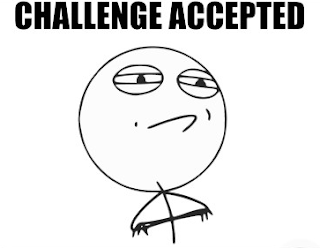 I installed Red Hat Linux 6.2, which was originally published in 2000. Then I downloaded the source code of Gimp 1.0, compiled it and embedded its dependencies, basically glib + gtk, into an app bundle. Stable core libraries such as libjpeg, X libraries and glibc were not bundled. I then copied this bundle to a brand new Ubuntu install and ran it. 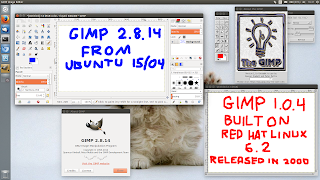 It worked without a hitch.

What have we learned from this? Basically that it was possible in the year 2000 to create binary only applications for Linux that would work 15 years later on a different distro.

If you follow the exact same steps today, it is presumable that you can create binary apps that will run without any changes in the year 2030.
Posted by Jussi at 9:04 PM No comments:

As we all know Linux applications are tied to the distro they have been built on. The do not work on other distros and even on later releases of the same distro. Anyone who has tried to run old binaries knows this. It is the commonly accepted truth.

But is it the actual truth?

In preparation for my LCA2016 presentation I decided to test this. I took Debian Lenny from 2009 and installed it in VirtualBox. Lenny is the oldest version that would work, the older ones would fail because distro mirrors no longer carry their packages. Then I downloaded GTK+ 1.2 from the previous millennium (1999). I built and installed it and GLib 1 into a standalone directory and finally compiled a helloworld application and a launcher script and put them in the same dir.

This directory formed an application bundle that is almost identical to OSX app bundles. The main difference to a distro package is that it embeds all its dependencies rather than resorting to distro packages. This is exactly how one would have produced a standalone binary at the time. I copied the package to a brand new Fedora install and launched it. This is the result. 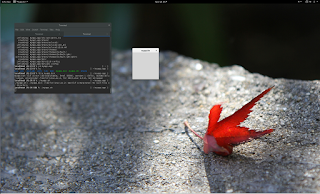 This is a standard Fedora install running Gnome 3. The gray box in the middle is the GTK+ 1.2 application. It ran with no changes whatsoever. This is even more amazing when you consider that this means a backwards compatibility time span of over 15 years, over two completely different Linux distributions and even CPU architectures (Lenny was x86 whereas Fedora is x86_64).