A look into building C++ modules with a scanner

At CppCon there was a presentation on building C++ modules using a standalone dependency scanner executable provided by the compiler toolchain. The integration (as I understand it) would go something like this:

This seems like an interesting approach for experimentation, but unfortunately it depends on functionality that is not yet in Ninja. It is unclear if and when these would be added to Ninja, as its current maintainers are extremely conservative in adding any new code. It is quite difficult to run experiments on approaches that have neither usable code nor all the required features in various parts of the toolchain.

Can we do it regardless? Yes we can!

The basic approach is simple
The code that does this can be found in the vsmodtest branch in the main Meson repository. To run it you need to use Visual Studio's module implementation, the test project is in the modtest directory. It actually does work, but there are a ton of disclaimers:
All in all nothing even close to production ready but a fairly nice experiment for ~100 lines of Python. This is of course a hack and should not go anywhere near production, but assuming Ninja gets all the required extra functionality it probably could be made to work reliably.

Is this the way C++ module building will work?

Probably not, because there is one major use case that this approach (or indeed any content scanning approach) does not support: code generation. Scanning assumes that all source code is available at the same time but if you generate source code on the fly, this is not the case. There would need to be some mechanism of making Ninja invoke the scanner anew every time source files appear and such a mechanism does not exist as far as I know. Even if it does there is a lot of state to transfer between Ninja and the scanner to ensure both reliable and minimal dependency scans.

There are alternative approaches one can take to avoid the need for scanning completely, but they have their own downsides.
Posted by Jussi at 11:07 PM No comments:

New Meson mugs, get them while they're hot!

Since there is no Meson swag available, I decided to make some. Here is the first one. 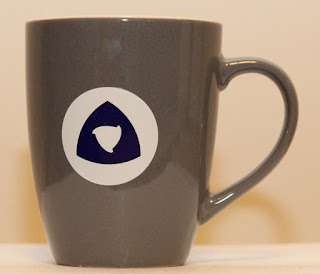 Now sadly there is no web store and shipping ceramics is expensive, so the only way to get them is to be in the same physical space as me. Unless you live in Finland (or have friends that do and can be persuaded to get one for you) the only real way is to meet up with me in some conference. The next one I'll be going to is CppCon in two weeks. I'm going to be on vacation in New York for one week before that so that is also an option. Supply is limited by how many I can pack in my luggage and survive airport baggage handlers.