Resist the urge to argue about app store security

Recently Miguel de Icaza wrote a blog post arguing that closed computing platforms where a major US corporation decides what software users are allowed to install are a good thing. This has, naturally, caused people to become either confused, disappointed or angry. Presumably many people are writing responses and angry comments. I almost started one writing one pointing out all the issues I found in the post.

Doing that would probably create a fairly popular blog post with followups. It might even get to the reddits and hackernewses and generate tons of comments where people would duke it out on issues on user choice vs the safety provided by a curated walled garden. There would be hundreds, if not thousands, of snarky tweets that make their poster feel superior for a while but are ultimately not productive. To quote Star Trek Deep Space Nine:


Spare me please-think-of-the-children speech and I'll spare you the users-must-have-control-over-their-own-devices speech [1].

Having us, the user and developer community, argue about this issue is pointless, unproductive and actively harmful. This particular phenomenon is not new, it even has a name. In fact this approach is so old that the name is in latin: Divide et impera. Divide and conquer. All the time and energy that we spend on arguing this issue among ourselves is time not spent on working towards a solution.

The actual solution to this issue is conceptually so simple it could be called trivial. The entire problem at hand is one that has been created by Apple. They are also the ones that can solve it. All they have to do is to add one new piece of functionality to iOS devices. Specifically that users who so choose, can change an option in the device they own allowing them to download, install and use any application binaries freely from the Internet. Enabling this functionality could be done, for example, in a similar way to how Android phones enable developer mode. Once implemented Apple would then make a public statement saying that this workflow is fully supported and that applications obtained in this way will, now and forevermore, have access to all the same APIs as official store apps do.

This is all it takes! Further, they could make it so that IT departments and concerned parents could disable this functionality on their employees' and children's devices so that they can only obtain apps via the app store. This gives both sets of users exactly what they want. Those who prefer living in a walled curated garden can do so. Those with the desire and willingness to venture outside the walls and take responsibility of their own actions can do so too and still get all the benefits of sandboxing and base platform security.

[1] Might not be a word-for-word accurate transcription.
Posted by Jussi at 2:51 PM 7 comments:

It ain't easy being a unique snowflake, the laptop purchasing edition

As the lockdown drags on I have felt the need to buy a new laptop as my old one is starting to age. A new category in the laptop market is 2-in-1 laptops with full drawing pen support. It has been a long time since I have done any real drawing or painting and this seemed like a nice way to get back into that. On the other hand the computer also needs to be performant for heavy duty software development such as running the Meson test suite (which is surprisingly heavy) and things like compiling LLVM. This yields the following requirements:

After a bunch of research it turns out that this set of requirements might be impossible to fullfill. Here are the tree best examples that I found.

The documentation is unclear on whether the pen supports tilting. More importantly this model is only available with Intel 8th gen processors and online reviews say the screen is super glossy.

Pen does not support tilting. The graphics card is a standard Intel HD, not Iris.

This is the one that gets the closest. There is no USB A or HDMI connectors, and the pen requires an AAAA battery. This is annoying but tolerable. Unfortunately the keyboard is of the super thin type, which is just not usable.

Probably going to stick with the current ones for now. New models come out at a fairly steady pace, so maybe this mythical white whale will become available for purchase at some point. Alternatively I might eventually just fold, give up on some requirements and buy a compromise machine. Typically this causes the dream machine to become available for purchase immediately afterwards, when it is too late.
Posted by Jussi at 5:48 PM 4 comments:

Most "mandatory requirements" in corporations are imaginary

In my day job I work as a consultant. Roughly six months ago my current client had a non-negotiable requirement that consultants are not allowed to work remotely. Employees did have this privilege. This is, clearly, a stupid policy and there have been many attempts across the years to get it changed. Every time someone in the management chain has axed the proposal with some variation of "this policy can not be changed because this is our policy and thus can not be changed", possibly with a "due to security reasons" thrown in there somewhere.

Then COVID-19 happened and the decision came to lock down the head office. Less than a day after this everyone (including consultants) got remote working rights, VPN tokens and all other bits and bobs. The old immutable, mandatory, unalterable and just-plain-how-we-do-things rules and regulations seemed to vanish to thin air in the blink of an eye. The question is why did this happen?

The answer is simple: because it became mandatory to due to external pressure. A more interesting question would be if it really was that simple, how come this had not happened before? Further, are the same reasons that blocked this obvious improvement for so long are also holding back other policy braindeadisms that reduce employee productivity. Unfortunately the answers here are not as clear-cut and different organizations may have different underlying causes for the same problem.

That being said, let's look at one potential causes: the gain/risk imbalance. Typically many policy and tech problems occur at a fairly low level. Changes benefit mostly the people who, as one might say, are doing the actual work. In graph form it might look like this. 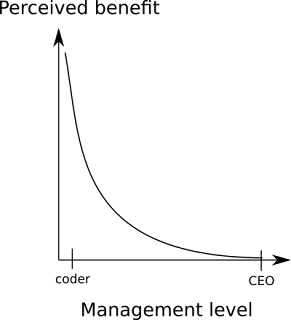 This is not particularly surprising. People higher up the management chain have a lot on their plate. They probably could not spend the time to learn about benefits from low level work flow changes even if they wanted to and the actual change will be invisible to them. On the other hand managers are fairly well trained to detect and minimize risk. This is where things fall down because the risk profile for this policy change is the exact opposite. 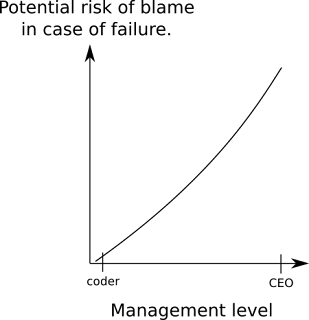 The big question on managers' minds (either consciously or unconsciously) when approving a policy change is "if I do this and anything goes wrong, will I get blamed?". This should not be the basis of choice but in practice it sadly is. This is where things go wrong. The people who would most benefit from the change (and thus have the biggest incentive to get it fixed) do not get to make the call. Instead it goes to people who will see no personal benefit, only risk. After all, the current policy has worked well thus far so don't fix it if it is not broken. Just like no one ever got fired for buying IBM, no manager has ever gotten reprimanded for choosing to uphold existing policy.

This is an unfortunate recurring organizational problem. Many policies are chosen without full knowledge of the problem sometimes this information is even impossible to get if the issue is new and no best practices have yet been discovered. Then it becomes standard practice and then a mandatory requirement that can't be changed, even though it is not really based on anything, provides no benefit and just causes harm. Such are the downsides of hierarchical organization charts.
Posted by Jussi at 6:40 PM 7 comments:

The second edition of the Meson manual is out

I have just uploaded the second edition of the Meson manual to the web store for your purchasing pleasure. New content includes things like:

Everyone who has bought the book can download this version (and in fact all future updates) for free.


Sales stats up to this point

The total number of sales is roughly 130 copies corresponding to 3500€ in total sales. Expenses thus far are a fair bit more than that.