The relative performance of C and C++ is the stuff of folk legends and Very Strong Opinions. There are microbenchmarks that can prove differences in performance in any direction one could wish for, but, as always, they are not conclusive in any way. For an actual comparison you'd need to have a complete, non-trivial program in one language, translate it to the other one without doing any functional changes and then comparing the results. The problem here is that this sort of a conversion does not exist.

So I made one myself.

I took the well known pkg-config program which is written in plain C using GLib and converted it to C++. The original code is available at Freedesktop and the converted version is on Github (branches master and cpp). The C++ version does not have any dependencies outside of C++ standard library whereas the C version depends on GLib and by extension pcre (which is an internal dependency of Glib, pkg-config does not use regular expressions).

All tests were run on Ubuntu 1704. The C++ version was tested both with GCC/stdlibc++ and Clang/libc++. Measurements were done with the gtk+ test in pkg-config's test suite.


The results in a single array

The first thing to note is that the C version is a lot smaller than the corresponding C++ executables. However if you factor in the size of the external third party dependency binaries, i.e. the shared libraries of GLib and pcre, the C version is an order of magnitude bigger. One could argue endlessly what is the correct way to calculate these sizes (because a system provided library is shared among many users) but we're not going to do that here.

C++ is known for its slow build times and that is also apparent here. Again it should be noted that compiling the C dependencies takes several minutes so if you are on a platform where dependencies are built from source, the C version is a lot slower.

The runtime is fast for all three versions. This is expected because pkg-config is a fairly simple program. Stdlibc++ is slower than the other two, whose runtime is within measurement error of each other.

Memory and resource management has traditionally been the problem of C, where the programmer is responsible for shepherding and freeing every single resource. This can be clearly seen in the result table above. Perhaps the most striking fact is that there are 79 explicit (that is, written and maintained by the developer) resource release calls. That means that more than 2% of all statements in the entire code base are resource deallocation calls.

Every manual resource deallocation call is a potential bug. This is confirmed by the number of memory leaks as reported by Valgrind. There are more than 1000 of them, several dozen of which are marked as "definitely lost". The C++ implementation on the other hand uses value types such as std::string and RAII consistently. Every resource is deallocated automatically by the compiler, which, as we can see, does it perfectly. There are no resource leaks.

Memory consumption is also interesting. The C version works by creating an array of package objects and strings. Then it creates a hash table with pointers that point to said array. This is the classical C "sea of aliased pointers" problem, where the developer must keep track of the origin and meaning of every single pointer with no help from the compiler.

The C++ version has no pointers but instead uses value types. This means that all data is stored twice: once in the array and a second time in the hash table. This could probably be optimized away but was left as is for the purposes of this experiment. Even with this duplication we find that the version using libc++ uses less memory than the Glib one. Stdlibc++ uses a fair bit more memory than the other two. To see why, let's look at some Massif graphs starting with stdlibc++. 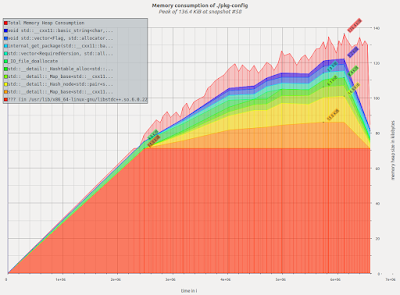 This shows that for some reason stdlibc++ allocates one chunk of 70 kB during startup. If we ignore this allocation the memory consumption is about 60 kB which is roughly the same as for the other two executables. 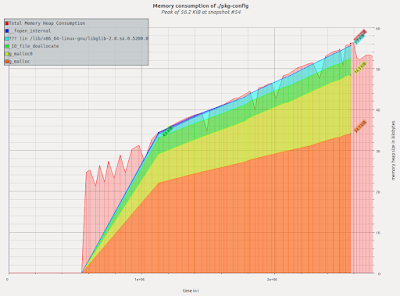 The most notable thing here is that Massif can not tell the difference between different allocation sources but instead lumps everything under g_malloc0. The C++ version shows allocations per container type which is extremely useful.

Finally, here is the chart for libc++. 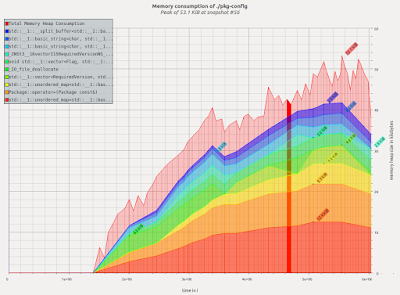 Libc++ does not have an initial allocation like stdlibc++, so its memory usage is lower. Its containers also seem to be more optimized, so it uses less memory overall. Memory consumption could probably be reduced by using a linear probing hash map (which is also what Glib does internally) rather than the node-based one as required by the C++ standard but it would mean having an external dependency which we want to avoid.

One of the many talking points of Rust is that converting C to it is easy. This is spoken of in quotes such as "Rust is the only language that allows you to convert existing C code into a memory safe language piece by piece" (link to original purposefully omitted to protect the innocent). Depending on your definition of a "memory safe language" this statement is either true or complete bunk.

If you are of the opinion that Rust is the only memory safe language then the statement is obviously true.

If not then this statement is fairly vacuous. Every programming language that has support for plain C ABI and calling conventions, which is to say almost every one of them, has supported transitioning from C code one function at a time. Pascal, D, Java with JNI, even Fortran have been capable of doing this for decades.

C++ can also do this but it goes even further: it supports replacing C structures one element at a time. Pkg-config had many structs which consisted of things like GLists of char pointers. In any other programming languages changing this element means converting the entire struct from C into your new language in a single step. This means changing all code that uses said struct into the new language in one commit, which is usually huge and touches a large fraction of the code base.

In C++ you can convert only a fraction of the struct, such as replacing one of the stringlists with a std::vector<std::string>. Other elements of the struct can remain unchanged. This means smaller, more understandable commits. The extra bonus here is that these changes do not affect functionality in any way. There are no test suite regressions during the update process, even when working with frankenstein structs that are half C and half C++.

Following this train of thought to its final station yields slightly paradoxical results. If you have a legacy C code base that you want to convert to D or Rust or whatever, it might make sense to convert it to C++ first. This allows you to do the hard de-C-ification in smaller steps. The result is modern C++ with RAII and value types that is a lot simpler to convert to the final target language.

The only other programming language in common use that is capable of doing this is Objective C but it has the unfortunate downside of being Objective C.

Converting an existing C program into C++ can yield programs that are as fast, have fewer dependencies and consume less memory. The downsides include a slightly bigger executable and slower compilation times.
Posted by Jussi at 4:37 PM 13 comments: