Projects and features Meson could use help with

A question I was asked during my LCA2018 presentation was how people could help the Meson project. I could not come up with proper projects off the cuff, so here are a bunch of things that have come up since. Feel free to contact us via IRC, email or any other medium if you wish to contribute.

WrapDB provides a simple way to download source dependencies automatically. Basically it takes an upstream release tarball, adds Meson build files to it if needed and publishes the result on the web. The work consists mostly of reviewing and merging submissions from the community. Creating your own is also fine. This is a fairly lightweight task, only requiring actions every now and then (submissions come less than once a week, typically).

For CI we use the free tiers of Travis and Appveyor. This works fairly well but it is very slow because our testing matrix is huge. Running the full test suite through AppVeyor takes about an hour. This slows us down a fair bit and in addition both CI providers have a nasty habit of breaking down fairly often. We also don't want to do priced tiers because they get ridiculously expensive for our usage pattern (as in, a few months of paid for macOS would cost more than a brand new Mac Mini).

We don't have any good ideas on how to make this better. If you do, let us know.

Meson is being used by a fairly large number of projects. This makes fixing bugs and refactoring code challenging because there is the possibility of regressions. It would be nice if we could do something similar to Rust developers and rebuild all or a large fraction of projects using Meson with the trunk version every now and then.

The XCode backend is currently a bit crappy. The main reason for this is that the XCode project file format is awful in many ways. The two main reasons being that it is completely undocumented and the fact that it is not really a file format as such, but more of a memory dump of XCode's internal data structures. But if you are the sort of person who enjoys a challenge of battling against windmills, this might be for you.

Integration with IDEs and the like is important and we want to provide tools for operations such as "add source file X to target Y" so everyone does not have to write their own implementations. There is actually code for this in trunk but it is quite limited and has bitrotted a fair bit. Resurrecting and making the code actually work would be very welcome.

This one also aims to improve the IDE integration features of Meson. As an example you can only get information about build targets one by one. This means that getting the information from a project that has thousands of targets takes forever. We really need a batch exporter so IDEs can grab all necessary project information in one go. There are probably a bunch of other things to improve as well.

Could these be done as part of gsoc/outreachy/other?

Possibly. Meson is not really an "entity" in the gsoc sense but we could potentially get something accepted under the Gnome umbrella. However anyone is welcome to submit patches, obviously, and several of the topics listed above are not nicely self-contained projects that would fit in the gsoc mold at all.
Posted by Jussi at 12:35 AM No comments:

A common problem in older C++ codebases is that sources compile slowly due to massive header includes. Headers include other headers, which include even more headers and then, somewhere in the guts of the system, someone includes a header that is very slow to parse. Now things are slow and nobody really knows why.

Trawling through the header soup manually is not feasible. Even if you were to manually inspect the headers, it is difficult to know which are the slow ones. Educated guesses can be made, such as anything having the word "boost" in its name is slow, but this only gets you so far. Fortunately it turns out that it is fairly straightforward to write a tool to find the slow ones automatically.

We need two things to be able to reliably measure the inclusion time breakdown of the headers of any source file.

The former can be obtained from a dependency file that the compiler can be told to generate during compilation (and which almost all modern build systems use by default). The latter can be obtained from the compilation_commands database which is also generated by most build tools today. The actual algorithm is simple: for each dependency header, create a dummy cpp file that just #includes that header, compile the source and measure the time it took.

I created a repo with the measurement script and a sample project to test it on. It has one source file and a few internal headers that include external headers. Here's the top part of its output:

Iostream has been traditionally considered to be big, bloated and slow to compile. However in this simple example we find that shared_mutex is even slower.

There are, of course, many caveats with this method. The main one being that this does not measure the code generation time, only parsing time. These two are usually highly correlated, though.
Posted by Jussi at 11:45 PM No comments:

One of the greatest things about creating software is seeing other people pick it up and run with it. Here is a great example of GTK's new development experience using Meson subprojects to automatically obtain dependencies.

It is easy to see how this makes it easier for newcomers to participate. There are no longer pages upon pages of instructions on how to set up a build environment and so on. All that is required is to clone one Git repo and start building. The build system will take care of all the rest.

The eventual goal is to be able to build the entire stack fully from scratch on any platform, even Windows with the Visual Studio compiler. Unfortunately there are still a few missing features but we'll get them added at some point.
Posted by Jussi at 12:39 AM No comments:

In my day job I work as a consultant. This means that I get to see all kinds of interesting things. One of them is this piece of hardware here:

This is a slot machine as operated by Veikkaus, which is the state run corporation operating all gambling services in Finland. There are roughly 20 000 slot machines in use in Finland currently. This is interesting on its own, but things get really fun when you look on the inside. 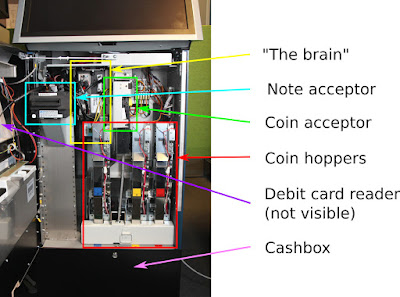 A fair fraction of the insides is taken by machinery that deals with coins. When a coin is inserted in the machine it first goes in the coin acceptor, which is marked with a green box in the image. It detects the type of the coin. Each denomination has its own exit chute. Bad coins are rejected from the machine while sorted coins get passed into coin hoppers (marked in red).

A coin hopper is basically a bowl of coins and a mechanism that is cabable of ejecting coins from it one by one. When you think of slot machines, you are probably thinking of the sound they make when start spitting out tons of coins after a jackpot. Coin hoppers are what create that particular sound. I recommend looking up videos on Youtube if you are interested in mechanical engineering, because the way they work is kind of fascinating.

The slot machine also accepts notes and debit card payments but these are mechanically much simpler and don't take much space. The only thing remaining in the picture is the box marked in yellow. It contains the actual brains of the entire machine.


The contents of the brain

The main system is, much like everything these days, a regular computer. This specific one is a fairly average industrial PC that is running a custom version of Debian. At boot it starts up the game software that is based on a custom version of the Ogre 3D graphics engine. The computer also manages and controls all other hardware in the cabinet, such as the coin hoppers and note acceptor mentioned above, using a custom, self designed controller board. The cabinet housing the device is also custom designed and built.

Thus, surprisingly, at its core a slot machine is roughly the same as a desktop PC running desktop games with a few extra peripherals. This means is that Linux desktop gaming has been mainstream among the general Finnish population for 15 years, which is roughly the amount of time these slot machines have been deployed.

In addition to the games themselves, the development environment is also 100% Linux. As a demonstration, here is a screen shot of a development version of the software running on a developer workstation. 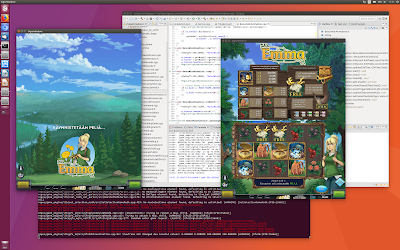 What about the money?

Like all forms of gambling, slot machines make quite a lot of money. The yearly profits, as of last count, were on the order of 500 million euros per year. As Veikkaus is a government run business, this money is given out to various charitable organisations as well as to the state. Given that Finland's yearly budget is on the order of 50 billion euros, this means that profits from Linux desktop gaming account for almost 1% of the entire budget of the state of Finland.

Thanks to Veikkaus for giving me permission to write this blog post. Extra special thanks for allowing to show the picture of the insides of a slot machine, which has never before been shown in public.
Posted by Jussi at 11:35 AM 4 comments: