Last week the news broke that Boost is switching from their own build system to CMake. This made me finally look properly into how Boost is built and what lessons we can learn from it. The results turned out to be quite interesting.

For those interested in diving into Boost's code note that the source layout in Git repos is different from what it is in the release tarballs. The latter has a sort of a "preinstalled header" directory with all public headers whereas they are inside each individual repository in Git. There also seem to be two different sets of build definitions, one for each.

My first idea was to convert a subset of Boost into Meson for a direct comparison. I spent a lot of time looking at the Jamfiles and could not understand a single thing about them. So instead I created a demonstration project called Liftoff, which can be downloaded from Github. The project had the following requirements:

The project consists of four independent subprojects:
Note how both lo_adder and lo_shuttle depend on lo_test. Each subproject comes with a header and unit tests, some come with a dependency library as well.

The core idea behind Meson's dependency system is that projects can declare dependency objects which specify how the dependency should be used (sort of like a Meson-internal pkg-config file). This is how it looks like for the string library:

Other projects can then request this dependency object and use it to build their targets like this:

This is Meson nomenclature for "try to find the dependency from the system and if not found use the one in the given subproject". This dependency object can then be used in build targets and the build system takes care of the rest.

The build command from the command line is this:

This builds and runs all tests. Once you have it built, here are things to try:

Some projects want to ship header only libraries but to also make it possible to build a helper library, usually to cut down on build times. This can be done but it is usually not pretty. You need to write "implementation header files" and do magic preprocessor incantations to ensure things are built in proper locations. We could replicate all of that in Meson if we wanted to, after all it's only grunt work. But we're not going to do that.

Instead we are going to do something fancier.

The main problem here is that traditionally there has been no way to tell that a dependency should also come with some source files that should be compiled in the dependent target. However in Meson this is supported. The lo_strings subproject can be set up to build in this way with the following command:

When the project is built after this, the lo_strings project is not built, instead its source files are put inside the dependent targets and built there. Note that the build definition files for the dependent targets do not change at all. They are identical regardless of where your dependency comes from or how it should be built. Also switching between how things should be built does not require changing the build definition files, it can be toggled from "the outside".

How much space do the build definitions take in total?

In embedded development the most important feature of any program is its size. The raw performance does not usually matter that much, but size does. A program that is even one byte larger than available flash size is useless.

GCC, Clang and other free compilers do an admirable job in creating small executables when asked to with the -Os compiler switch. However there are still optimizations that could be added. Suppose we have two functions that looks like this:

They would get compiled into the following asm on x86-64:

If you look carefully, the last 7 instructions on both of these functions are identical. In fact the code above can be rewritten to this:

Depending on your point of view this can be seen as either a cool hack or an insult to everything that is good and proper in the world. funcb does an unconditional jump inside the body of an unrelated function. The reason this works is that we know that the functions end in a ret operand which pops a return address from the stack and jumps into that (that is, the "parent function" that called the current function). Thus both code segments are identical and can be collapsed into one. This is an optimisation that can only be done at the assembly level, because C prohibits gotos between functions.


How much does this save?

To test this I wrote a simple Python script that parses assembly output, finds the ends of functions and replaces common tails with jumps as described above. It uses a simple heuristic and only does the reduction if there are three or more common instructions. Then I ran it on the assembly output of SQLite's "amalgamation" source file. That resulted in reductions such as this one:

This function tail is being used in two different ways, sometimes with the setne command and sometimes without. In total the asm file contained 1801 functions. Out of those 1522 could be dedupped. The most common removals looked like this:

That is, the common function suffix. Interestingly, when the dedupped asm is compiled, the output is about 10k bigger than without dedupping. The original code was 987 kB. I did not measure where the difference comes from. It could be either because the extra labels need extra metadata or because the jmp instruction takes more space than the instructions it replaces because the jump might need a 32 bit offset. A smarter implementation would look to minimize the jump distance so it would fit in 16 bits and thus in a smaller opcode. (I'm not sure if x86-64 has those opcodes so the previous comment might be wrong in practice but the reasoning behind it is still valid.)

Is this actually worth doing?

On the x86 probably not because the machines have a lot of ram to spare and people running them usually only care about raw performance. The x86 instruction set is also quite compact because it has a variable size encoding. The situation is different in ARM and other embedded platforms. They have fewer instructions and a constant encoding size (usually 32 bits). This means longer instruction sequences which gives more potential for size reductions. Some embedded compilers do this optimization so The Real World would seem to indicate that it is worth it.

I wanted to run the test on ARM assembly as well, but parsing it for function tails is much more difficult than for x86 asm so I just gave up. Thus knowing the real benefits would require getting comments from an actual compiler engineer. I don't even pretend to be one on the Internet, so I just filed a feature request on this to the Clang bug tracker.
Posted by Jussi at 2:54 PM No comments:

Is every build system using Ninja just as fast as every other?

One of the most common arguments against Meson is that "it is only fast because it uses Ninja rather than Make, using any other Ninja build generator would be just as fast". This is always stated as fact without any supporting evidence or measurements. But is this really the case? Let's find out.

For testing one needs a project that has both CMake and Meson build definitions. I'm not aware of any so I created one myself. I took the source code of the Mediascanner 2 project, which is using CMake and converted it to use Meson. This project was chosen solely based on the fact that I wrote the original CMake definitions ages ago so I should have a fairly good understanding of the code base. The project itself is a fairly typical small-to-medium project written in C++ with a handful of system dependencies.

Compiling and running the project on a regular laptop gives a fairly straightforward answer. Both build systems are roughly as fast. So, case closed then?

Well no, not really. The project is small and machines today are very fast so a similar result is not very surprising. For a better test we would need to either convert a much larger project or use a slower machine. The former is not really feasible, but the latter can be achieved simply by running the tests on a Raspberry Pi 2. This is a fairly good real world test, as compiling programs of this size on a raspi is a common task.

The tests were run on a Rasberry Pi 2+ running Jessie with a sid chroot. The CMake version was the latest in Sid whereas Meson trunk was used. Each measurement was done several times and the fastest time was always chosen. If you try to replicate these results yourself note that there is a lot of variance between consecutive runs so you have to run them many times. The source code can be found in this repository.

The first measurement is how long running the first configuration step takes. 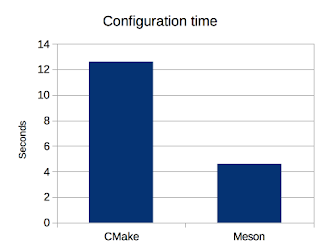 CMake takes 12 seconds whereas Meson gets by with only four. This is fairly surprising as CMake is a C++ executable whereas Meson is implemented in Python so one would expect the former to be faster. Configuration step is run seldom, so it's ultimately not that interesting. Most of the time is probably spent on a full build, so let's look at that next. 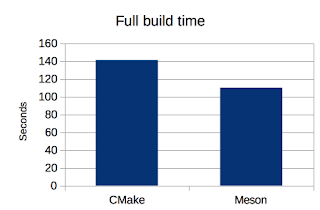 CMake takes 2 minutes and 21 seconds to do a full build. Meson is 31 seconds, or 20%, faster clocking at 1 minute 50 seconds. Both systems build the same files and they have the same number of build steps, 63, as reported by Ninja. Finally let's look at the most common task during development: incremental compilation. This is achieved by touching one source file and running Ninja. 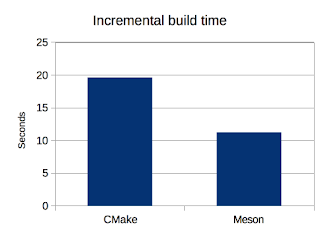 In this case Meson is almost 50% faster than CMake. This is due to the smart link skipping functionality that we stole from LibreOffice (who stole it from Chromium :). This improvement can have a big impact during day to day development, as it allows faster iteration cycles.

Ninja is awesome but not made of magic. The quality of the generated Ninja file has a direct impact on build times. Based on experiments run here it seems that Meson performs consistently faster than CMake.