About that "Google always builds everything from source every time" thing

One of the big battles of dependencies is whether you should use somehow prebuilt libraries (e.g. the Debian-style system packaging) or vendor all the sources of your deps and build everything yourself. Whenever this debat gets going, someone is going to do a "well, actually" and say some kind of variation of this:


Google vendors all dependencies and builds everything from source! Therefore that is clearly the right thing to do and we should do that also.

The obvious counterargument to this is the tried-and-true if all your friends jumped off a bridge would you do it too response known by every parent in the world. The second, much lesser known counterargument is that this statement is not actually true.

Google does not actually rebuild all code in their projects from source. Don't believe me? Here's exhibit A: 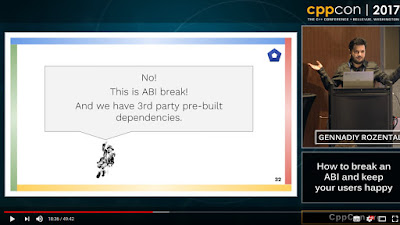 The original presentation video can be found here. Note that the slide and the video speak of multiple prebuilt dependencies, not just one [0]. Thus we find that even Google, with all of their power, money, superior engineering talent and insistence to rebuild everything from source, do not rebuild everything from source. Instead they have to occasionally use prebuilt third party libraries just like the rest of the world. Thus a more accurate form of the above statement would be this:


Google vendors most dependencies and builds everything from source when possible and when that is not the case they use prebuilt libraries but try to keep quiet about it in public because it would undermine their publicly made assertion that everyone should always rebuild everything from source.

The solution to this is obvious: you just rebuild all things that you can from sources and get the rest as prebuilt libraries. What's the big deal here? By itself there would not be, but this ideology has consequences. There are many tools and even programming languages designed nowadays that only handle the build-from-source case because obviously everyone has the source code for all their deps. Unfortunately this is just not true. No matter how bad prebuilt no-access-to-source libraries are [1], they are also a fact of life and must be natively supported. Not doing that is a major adoption blocker. This is one of the unfortunate side effects of dealing with all the nastiness of the real world instead of a neat idealized sandbox.

[0] This presentation is a few years old. It is unknown whether there are still prebuilt third party libraries in use.

[1] Usually they are pretty bad.