Converting a project to Meson: the olc Pixel Game Engine

Meson's development has always been fairly practical focusing on solving real world problems people have. One simple way of doing that is taking existing projects, converting their build systems to Meson and seeing how long it takes, what pain points there are and whether there are missing features. Let's look at one such conversion.

We'll use the One Lone Coder Pixel Game Engine. It is a simple but fairly well featured game engine that is especially suitable for beginners. It also has very informative YouTube channel teaching people how to write their own computer games. The engine is implemented as a single C++ header and the idea is that you can just copy it in your own project, #include it and start coding your game. Even though the basic idea is simple, there are still some build challenges:

The Meson build definition that provides all of the above is 25 lines long. We'll only look at the basic setup, but the whole file is available in this repo for those who want all the details. The most important bit is looking up dependencies, which looks like this:

The first two dependencies are the same on all platforms and use Meson's builtin functionality for enabling threading support and OpenGL. After that we add platform specific dependencies as described above. The stdc++fs one is only needed if you want to build on Debian stable or Raspberry Pi OS, as their C++ standard library is old and does not have the filesystem parts enabled by default. If you only support new OS versions, then that dependency can be removed.

The interesting bit here is libpng. As macOS does not provide it as part of the operating system, we need to build it ourselves. This can be accomplished easily by using Meson's WrapDB service for package management. Adding this dependency is a matter of going to your project's source root, ensuring that a directory called subprojects exists and running the following command:

This creates a wrap file that Meson can use to download and build the dependency as needed. That's all that is needed. Now anyone can fork the repo, edit the sample program source file and get going writing their own game.

Unlike the Ninja and Visual Studio backends, the Xcode backend has always been a bit ...  crappy, to be honest. Recently I have started work on bringing it up to feature parity with the other backends. There is still a lot of work to be done, but it is now good enough that you can build and debug applications on macOS. Here is an example of the Pixel engine sample application running under the debugger in Xcode. 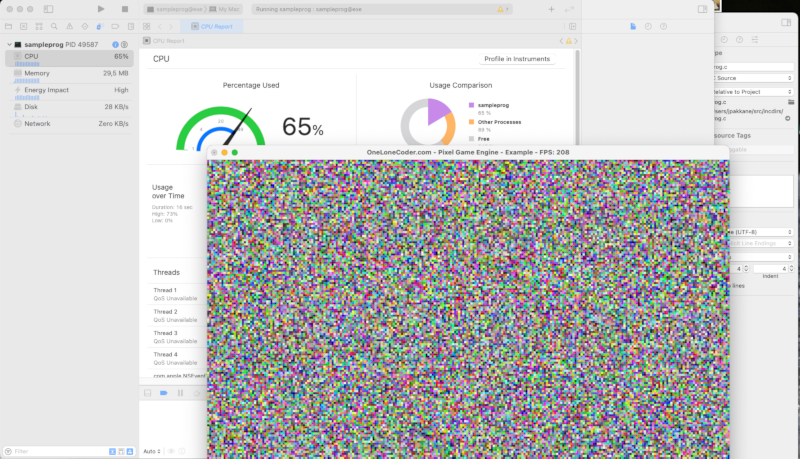 This functionality will be available in the next release (no guarantees on feature completeness) but the impatient among you can try it out using Meson's Git trunk.