Portability is not sufficient for portability

This blog post has some examples of questionable quality. This should not be meant as an attack on those projects. The issues listed here are fairly widespread, these are just the examples I ran into while doing other work.

What is meant by portability?

Before looking into portable software, let's first examine portability from a hardware perspective. When you ask most people what they consider a "portable computer", they'll probably think of laptops or possibly even a modern smartphone. But what about this: 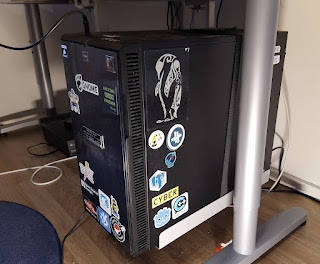 This is most definitely a computer (the one I'm using to write this blog post, in fact), but not portable. It weighs something on the order of 10 kilos and it is too big to comfortably wrap your hands around.

And yet, I have carried this computer from one end of the Helsinki metropolitan region to another. It took over an hour on a train and a subway. When I finally got it home my arms were so exhausted that for a while I could not even lift them up and all muscles in them were sore for several days. I did use a helper carry strap, but it did not help much.

So in a way, yes, this computer is portable. It's not really designed for it, the actual transport process is a long painful slog and if you make an accidental misstep and bump it against a wall you run the risk of breaking everything inside. But it is a "portable computer" as a single person can carry it from one place to another using nothing but their own muscles.

Tying this to software portability

There is a lot of software out there that claims to be "portable" but can only be said to be that in the same way as the computer shown above is "portable". For the rest of the post we're only going to focus on portability to Windows.

Let's say a project has a parser that is built with Lex and Bison. Thus you need to have those programs during compilation. Building them from source is problematic on Windows (because of, among other things, Autotools) so it would be nice to get some prebuilt binaries for them. After a bit of googling you might find this page which provides Windows binaries. That has last been updated in 2004. So no.

You could also install Msys2 and get the binaries with Pacman. If you are using Visual Studio and just want to build the thing, installing a whole separate userspace system and package manager just to get two executables seems like bit of an overkill. Thinking about it further you might realize that you could install Msys on some other machine, get the executables, copy them and their direct dependency DLLs to your machine and put them in PATH. If you try this, the binaries segfault on run, probably because they can't access their localisation files that are "somewhere".

As an another example let's look at the ICU project. It claims to be highly portable, and it kind of is, here is a random snippet from their highly portable Makefile. 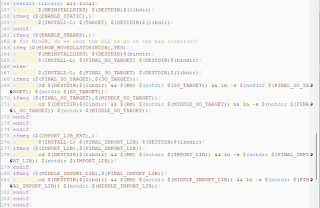 I don't know about you, but just looking at that … thing gives me a headache. If you ever need to do something the existing functionality does not provide, then trying to decipher what that thing is doing is an exercise in masochism. For Windows this is relevant, because Visual Studio only ships with nmake, which is not at all compatible with Make so you need to decrypt absolutely everything.

Again, this is portable to Windows, you just need to prebuild it with MinGW or using the provided VS solution files, copying the libraries from one place to another and using them. This is very much "desktop PC portable" again.

Sometimes you don't get even that. Take for example the liblangtag project. It is a fairly typical dependency library that provides a single shared library. It even hides its symbols and only exports those belonging to the public API. Sadly it does this using Libtool magic postprocessing. On Windows you have to annotate exported symbols with magic markers. Thus it is actually impossible to build a shared library properly on VS without making source code changes[1]. Thus you have to go the Mingw build route here. But that is again "portable" as in if you spend a ton of time and effort then you can sorta kinda make it work in a rubegoldbergesque way.

Due to various reason I have had to deal with the innards of libraries of different vintage. Fairly often the experience has been similar to dragging my desktop computer across town: arduous, miserable and exhausting. It is something I would wish upon my worst enemy and also upon most of my lesser enemies. It would serve them right.

In my personal opinion saying that some piece of code is portable should imply some basic ease of use. If you need to spend time fighting with it to make it work on an uncommon platform, toolchain or configuration then the thing is not really portable. It also blocks adoption, because if some library is a massive pain to use, people will prefer to reimplement the functionality or use some other library, just to get away from the pain.

Since changing the generally accepted meanings of words is unlikely to work, this won't happen. So in the mean time when you are talking about portability with someone else, do be sure to specify whether you mean "portable as in a desktop gaming PC" or "portable as in a laptop".

Some years ago I ported a sizable fraction of LibreOffice to build with Meson. It worked only on Linux as it used system dependencies. I rebased it to current trunk and tried to see if it could be built using nothing but Visual Studio by getting dependencies via the WrapDB. This repo contains the code, which now actually does build some code including dependencies like libxml, zlib and icu.

The code that is there is portable in the laptop sense. You only need to do a git checkout and start the build in a VS x64 dev tools prompt. It does cheat in some points, such as using pregenerated flex + bison sources, but it's not meant to be production quality, just an experiment.

[1] The project in question seems to have more preprocessor macro magic definitions than actual code, so it is possible there is some combination of defines that makes this work. If so, I did not manage to find it. This is typical in many old school C projects.